Arnold Schwarzenegger – Mindset Of A Champion 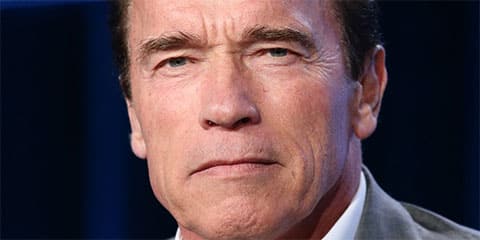 Early in his body building career Arnold was only allowed to go to the gym three times a week. Instead of accepting that he built his own gym at home. And to keep himself motivated he placed posters of his favorite body builders so he could always visualize his goal.

Later when Arnold was told he couldn’t make it in Hollywood, because people wouldn’t understand his accent and wouldn’t be able to pronounce his surname he simply overcame that by finding initial roles that required little dialogue and thereby broke the rule book so to speak.

Now he is a household name.

He has been the Governor of California and perhaps may one day even run for President.

His life seems like a text book example of seemingly impossible goals which those around you say are ‘unrealistic’ yet making them become a reality using the power of your mind.

Fueled by those early setbacks and failures he developed a passion, direction and belief in himself that just didn’t allow for ‘maybe I can do it’ in his life.

He decided early on to eradicate any doubts or uncertainties and to believe in himself when perhaps others around him did not.

All driven by the power of his mind.

The power of a passion so determined and so great that literally nothing could deter this man from hitting his goals once he had ‘realistically’ set them.

A passion born when we are young and our possibilities seem endless but which is often smothered and withered by the time we reach ‘maturity’.

As we reached adulthood our beliefs systems subtlety changed broken under the pressure of responsibilities and our new ‘reality’.

Safe and practical became much more important than ‘dreams’ and we learned to numb those old ideas of endless possibilities.

Afraid of the unpredictable we found security instead in satisfying our predictably selfish wants and needs that gave us temporary relief from our ‘unrealistic’ childish dreams.

We silenced the child within.

But sometimes just sometimes that unruly child pops its ugly head up and has something to say about how it has been locked away in the closet for so many years.

About how we could in a moment of rashness find the strength to change it all – in an instant.

Because there is always hope. Our inner child always hopes we will relent and allow it back out into the open once more.

That we will find the strength to be honest with our SELF and rekindle OUR PASSION.

BREAK SOME RULES (NOT THE LAW)

DON’T BE AFRAID TO FAIL

Interrupting Patterns
One amazing thing about life is how we have the ability to change. Literally change instantly the moment we decide.

By deciding to change how we perceive things and to start developing a RELENTLESS mindset.

In one moment of change we can wake up and decide that today is THE day you will become the person you have always wanted to be.

And that there are no obstacles or hurdles you cannot overcome.

Today you can wake up and decide to replace the “maybe” in your life with the “I can and I will”.

That today you will not be driven by fear but by love and passion.

The passion to create dreams again and to set goals and work toward them relentlessly.

Today you can decide to perceive things differently. To realize (real eyes) that situations are what YOU make them.

And make them positive and work for you instead of against you.

By reframing every day occurrences obstacles become opportunities and the path you imagine keeps driving you forward.

Creating a new and positive mindset can change everything.

Become The Champion Of Your Own Life

Instead of thinking one day I might pursue my dream – that day becomes NOW.

There is no more room for maybe’s.

Each day is a day to say to your self I want to do so and so and today I will do whatever it takes to make that happen.

‘Maybe’ is just an open door to the path of failure when the going gets too tough.

“You have to visualize and that creates the will.” – Arnold.

No one said this was easy but it IS worth it.

Being absolutely sure of yourself and where you want to go is the first step to not letting anything stand in your way.

Isn’t it about time you became the champion of your own life, just like Arnold.

The time is NOW to live like there is no tomorrow. Because, before long there will be no more tomorrows.